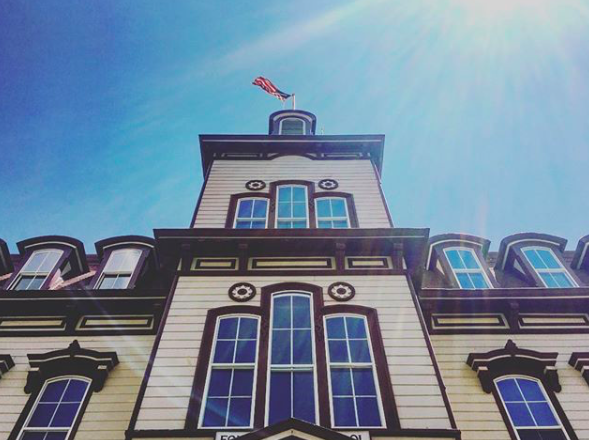 The parking lot had plenty of spaces when I arrived at the museum for the Fourth Ward School. I hoped the inside would be air conditions but, still, when I exited my car I grabbed my warm bottle of water. You never know when you might need a sip of water in the summer, even if it isn’t cold water. It’s the thought that counts, right? In any case, I was getting thirsty. So there’s that.

I glanced down the road, away from Viriginia City’s main street, and noted a sign indicating a tour of an old silver mine. Well, I was down for that! I made a mental note to venture there after touring the museum.

The interior was delightfully cooler than the warm- and getting warmer- outdoors so I greeted the air conditioning with a smile as I walked toward the counter. I had to pay something to get in. I don’t remember what the amount was. I was given a map of the school before going on my merry way.

I should say- what I was given was really what looked like an old newspaper page with the map of the school on one side and old news articles on the other: articles discussing the history of the school.

There are two floors open to the public, all the open rooms dedicated to the history of the school and the area. END_OF_DOCUMENT_TOKEN_TO_BE_REPLACED